Victorian Solar’s Sigh of Relief – how long will it last?

Home
>
News
>
Newsletter
>
Victorian Solar’s Sigh of Relief – how long will it last?

Changes to Vic Solar Homes rebate brings much needed relief – but (how long) will it last?

After months of uncertainty, it looks like Victoria’s solar industry can finally breathe a collective sigh of relief, with the introduction of a ‘more rebates, more often’ approach that should help return stability to the market.

For those companies that managed to pull through the months of turmoil, they can now get back to the important work of bringing the state’s electricity system into the modern era.

The government’s policy shift is undoubtedly a direct result of the increasing pressure it was under from industry, led by fierce and vocal efforts from the Clean Energy Council, Smart Energy Council, Solar Cutters and countless other organisations & individuals.

Interestingly, the government has decided to double down on its commitment, allocating a larger budget and a greater number of overall incentive slots to the program, plus greater safeguards for safety.

But will it fix the problem for good? Let’s have a look.

Here are the key changes to the Solar Homes program that the government has brought in:

First reaction: Now will there be enough rebates to go around?

Read on to find out why you shouldn’t break out the (expensive) champagne just yet.

A boost in the quantity of rebates available is certainly good news, as there clearly have not been enough to sate demand since the beginning of the financial year (hence the industry outcry).

But will the new level be sufficient? He’s a quick look at the numbers as we understand them:

So – at first glance, the government’s allocation of 5,000-6,500 rebates per month should be enough for supply to be greater than demand.

But don’t break out the champagne just yet…

In addition to a few months at 6,500 rebates/month, the government will add an extra 3,250 rebates into the release on the 2nd September.

This forward loading will help the industry recalibrate after many months on a starvation diet. But it’s going to take all of September, October’s and November’s extra rebates to compensate for revenues lost during the May/June famine and the starvation diet of July/August, as illustrated in the table below 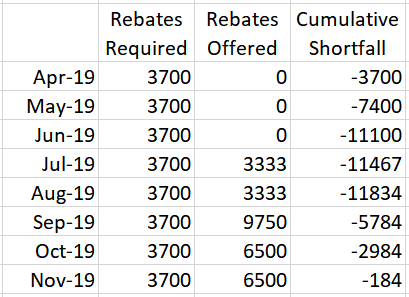 Sadly, all of this will be too late for the businesses that have already starved to death.

Take three: Could we face the same problems again next year?

It’s not certain if there was a growth trend operating beyond that figure (April showed a fall nationally because of Easter and ANZAC Day, and May’s figures were affected by the rebate’s removal) – but it’s certainly a possibility. 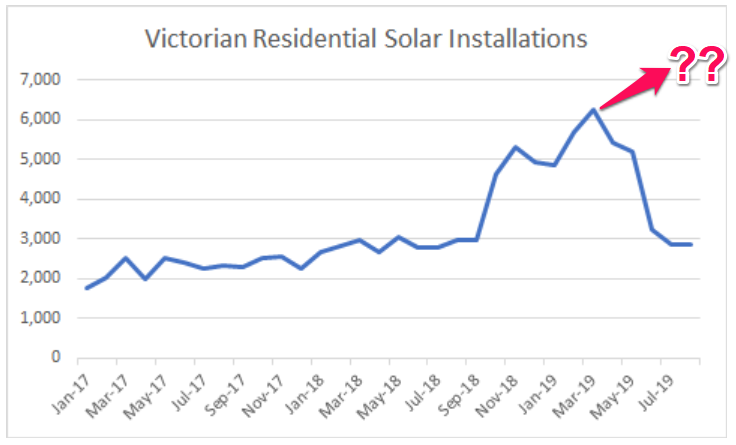 That being said, March’s 6,272 installations (of which about 1,600 proceeded without a rebate), suggests that 4672 rebates were required that month – which is a bit too close for comfort to the 5,000/month that will apply from December onwards (albeit at a lower rebate value from January).

If history has shown anything, it’s that these programs become immensely popular and continue to grow and grow and grow, taking on a life of their own.

It’s therefore not hard to imagine demand for rebates exceeding 5,000/month in the first half of 2020. The ‘gold rush’ mentality that ensues could return us to the situation we’ve just dragged ourselves out of.

There are plenty of veteran solar businesses that have ‘seen this all before’. They’re the ones that didn’t re-invest everything back into growth during the gold rush, and though they may have lost some market share, they had something in the kitty during the famine.

Hopefully the hundreds of new solar businesses will learn from their recent experience and take a more measured approach, having realised this could all happen again so easily.

As I wrote in RenewEconomy not long ago:

…consumer demand is also affected by solar system pricing, the US dollar, the federal STC subsidy, and electricity and feed-in tariff prices – each of which change dynamically and are all beyond the control of the state government.

A change in any one of these factors could see a return to the current situation, quicker than the government could respond.

Put simply, if a solar subsidy scheme does not dynamically respond to the levels of uptake, then it will either be ineffective or it will cap installation levels.

This is the #1 lesson learned from every solar subsidy program worldwide and in Australia.

So how do you create an incentive scheme that dynamically adjusts to uptake, while sticking to a fixed budget allocation?

You take the approach of the world’s most mature solar subsidy scheme, that now used in Germany. When the market is over-stimulated (i.e. demand for the subsidy outstrips the budget), the subsidy is reduced along with a commensurate increase in the number of subsidies available at the new level (and vice versa).

This is designed as a self-correcting mechanism that prevents the boom-bust stop-start solar coaster from occurring.

Coming back to these points, here are my thoughts on the measures brought in to ‘fix’ the broken Solar Homes Package: